Progress over weeks 2 & 3 moved faster than expected. We began performing some of the demolition work on the back 9 before closing. We appreciate the membership's patience and understanding allowing us to keep moving even as the back 9 remained open.

We moved through demolition on the front significantly faster than expected. We have now removed all greens side bunker sand #1-18. All drainage is removed from all bunkers. Demolition of the back 9 should be complete next week.

Our golf course architect Andy Staples has been making several visits per week to ensure the work is being performed per his design. Andy also helps to track progress and budget on a weekly basis. So far there are 4 changes to the scope of work. The sub air valves for greens #3, #5, and #6 will have to be moved and lowered to accommodate the changes to the bunkers and elevation changes in the greenside mounding. This work has been completed already.

Some additional land surveying also had to be performed to effectively utilize the GPS system. The GPS allows us to make sure bunkers are being placed properly, track quantities of disruption and the size of bunkers. This hand-held system has a small computer with the bunker renovation plans installed to make sure everything is being put in the proper place.

Our bunker shaper, Derek has arrived on property to start forming all the new and re-designed bunkers. Many of the new bunkers will start to take shape on holes #4-7 this week and next week.

Once the shaping takes place the drainage and liner work will begin. We expect to begin installing liner and drainage the week of 6/7.

Next week, the sod will begin to be laid on several bunkers that are being eliminated on 4 & 7.

You may have noticed the large piles of sand in the parking lot. We have begun receiving the new sand for the bunkers. So far about 200 tons have arrived. 300 more tons will be arriving next week. An additional 1000 tons of tons of sand will be needed to complete the project. Most of the sand will be stored in the parking lot at the club. Some of the sand is being stored in the G&G yard.

G&G continues the in-house landscape project. We have completed #5 & #6. The tee area retention of #5, left side of #5 along with the oleander & fairway, behind the green and the left side of #6 along the cart path has all received additional vegetation. Currently, we are working on the desert area of the #3 tee.

G&G is also working on some of the oleanders that are encroaching over the cart paths. We will be cutting back some areas significantly now to give them the next several months to green up before re-opening the course.

Oleanders being trimmed back from cart path on #5 tee 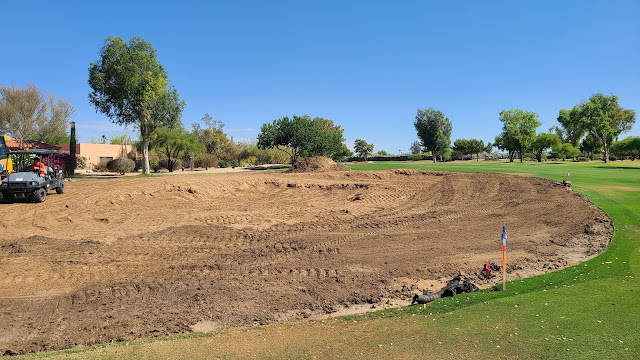 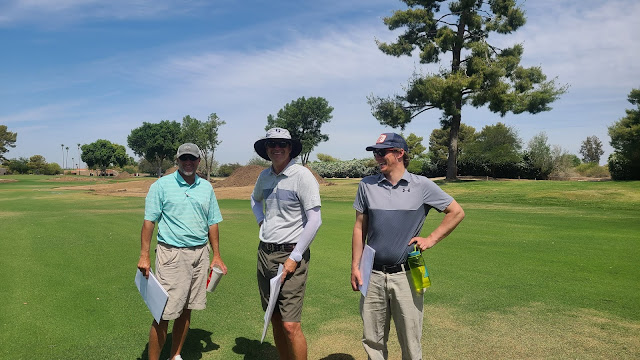