Welcome back for the 2018/19 winter golf season at the Club.  We’ve had an eventful last 6 weeks to say the least with multiple projects and unprecedented weather.  Since October 1st we have received 7.3 inches of rain which has presented quite a few challenges with over-seed and we would like to fill you in on what has been happening on the golf course and what to expect when we open.

Starting September 17th we closed to prepare the collars for the new bent grass sod. This was a challenging project trying to remove the all the Bermuda encroachment, match the depth of the new sod, and get the edges of the turf in a 3-foot span to match the new grass mowed at 3/16” of inch. To add to the challenge, it would take 10 days because of the ability to only ship 1/3 of the required sod in refrigerated trucks from California every 3 days. The project took 80% of our staff 7 of the 10 days to prepare for the sod. Additionally, not all sod was cut at perfect even depths adding to the difficulty of perfecting a low-cut turf in such a small space. We are still working through some high and low spots and some mending of the seams but overall are happy with the results. The hope being that using straight bent will be a better long-term solution to the collars. Eventually, after some time we will have to re-sod the collars for the bermuda encroachment again and we anticipate that the bent will be much for successful at slowing the encroachment. We will continue to monitor the bermuda grass encroachment and be as pro-active to prevent it as possible.

Overseed has been quite the adventure this year. Overseed preparation started September 24th and took five days. The planned day for seeding was October 1st but with the Hurricane Rosa expecting to dump a significant amount of rain it was decided to wait.  After Rosa dumped 4.5” of rain on October 2nd there was a significant amount of clean up to do before seeding could be completed with wash outs and flooding throughout the course. In addition, the extra delay and rain caused a significant green up and growth in the Bermuda and the course had to be re-prepped. To add to the complications, we lost a motor in our pump station. With no time to spare because of overseeding a new motor had to purchased and installed within several days or risk delaying overseeding even longer. This new motor will be salvaged when the new pump station is installed later this year giving us an emergency backup motor for the future. Seeding was completed on October 5th during a very long 13-hour day for the staff. In addition, Kyle and Nathan from the golf shop came out and gave a helping hand during the seeding.

Unfortunately, a day later on October 7th we received another 1.5” inches of rain resulting in the same washouts as the previous storm and all of the cleanup work to be undone.  This rain also moved a significant amount of seed we had just put down. We spent the next two days walking fairways, raking out debris and reseeding the course. In addition, a lightning strike took out the back nine irrigation system causing significant problems with the central control of our irrigation system.
Once re-seeding and our second round of storm clean-up was completed another storm came through dumping and additional 1” inch of rain and again, undoing all the work from the previous two storms.   Once again, all the storm clean had to begin over again. Through all the storms the bunkers took on a significant amount of damage. Much of the sand was moved causing a substantial effort of clean, fix, and prepare the bunkers for opening.  Through all the chaos of the weather the temperatures have been ideal for the ryegrass and we are quite pleased with where we are for opening day.

We have spent a significant amount of time attending to the greens during the past several weeks. Several staff member have been diligently fixing ball marks, micro topdressing scared ball marks, and plugging damage from the stress caused by our summer temperatures. During the heavy rain the greens became saturated and “puffy” causing some scalping in areas by mowers due to the heavy saturation. Between the rain and trying to achieve the expected speeds for opening day we did incur a little bit of damage from the scalping. These areas will heal, and we will continue to monitor them to ensure a full recovery.

Due to the amount and frequency of rain we have received this October the retention areas between holes 4, 5 and 7 are saturated and muddy.  Until they dry out we are not able to get equipment in to clean them up and repair them.  We will do this as soon as possible but until then please play these areas as Ground Under Repair.

As the course opens we will be cart path only for the first several weeks to allow the ryegrass to continue to establish and mature. Once the carts come off cart paths you can expect to once again see the rope placed in the fairways to help remind the carts to return to the cart path. We also ask that all push carts remain 10-15 feet from the greens and please do not push carts between greenside bunkers and the greens.

We look forward to seeing everyone around the Club as we begin the 2018/19 winter golf season. 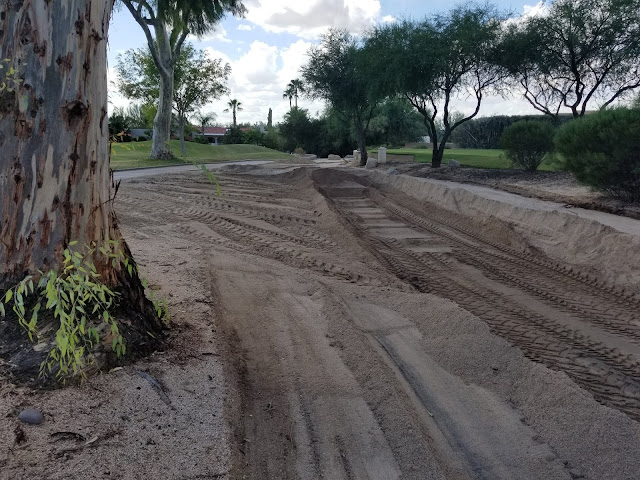